I made a franken for the Chinese New Year. Red for luck. And gold, which is not lucky per se, but it's gold so still good. These were all taken on a cloudy day. 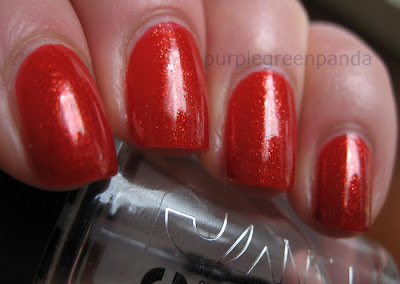 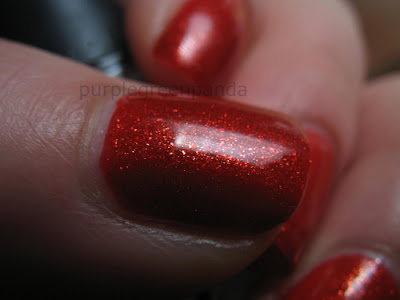 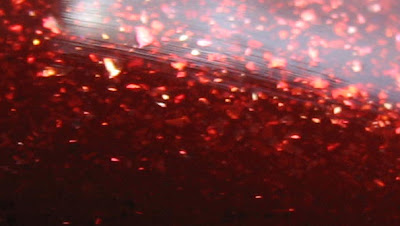 The recipe is easy-peasy. 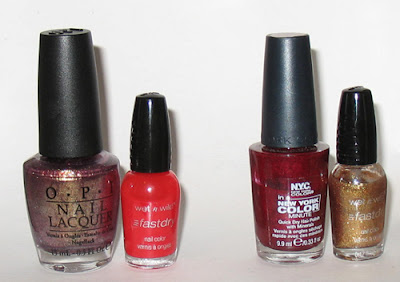 This franken was inspired by OPI Smitten With Mittens. I was originally going to use the two polishes you see on the right. NYC Chelsea and WnW The Gold & the Beautiful, but then I remembered I had an OPI with gold flecks. In theory, companies use the same glitter for the polishes that have that type of glitter. I'm sure there's a better way to explain that. I'm also sure that it would be foolish to assume this of OPI. *snort* And actually, the glitter in both polishes are very, very similar. In any case, I grabbed Rally Pretty Pink and because I was feeling like something brighter, WnW Everybody Loves Redmond. Redmond is a red-orange jelly. I mixed equal parts Redmond and RPP, then a drop of RPP at a time until the franken didn't lean orange at all. I love simple. 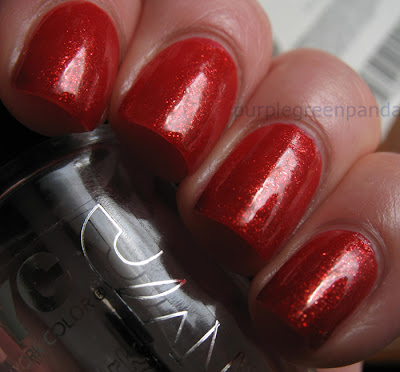 And I'm having some issues with blogger right now. I'm gonna update some stuff, see if that helps. See y'all later, hopefully, lol.
Posted by purplegreenpanda 3 comments: Links to this post

Whoa, sorry to disappear. I was overwhelmed with exams and a cold, something had to give. But enough excuses. This is LA Colors Live stamped with Konad Special White and plate m64. So many people say the Konad polishes are the easiest to stamp with, but I don't really agree. I had to redo this manicure because of smearing, but even when I was careful and light-handed with topcoat the design smeared a little. Bah! 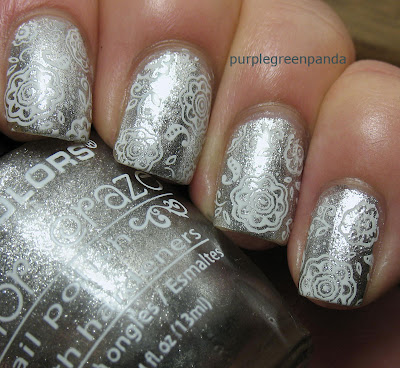 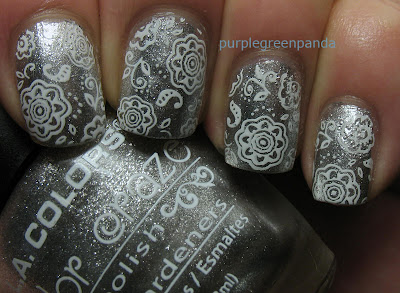 In hindsight, it wasn't a great idea to try to post every day in November. But my picture stash is about three-fourths organized now. That's something. Yay! And exams are done for now, except I still have one project due time-stamp 11:59 PM Friday. Boo! So, back early next week. Happy Thanksgiving, Usians!
Posted by purplegreenpanda 2 comments: Links to this post

This is one of the polishes I won in a giveaway hosted by Paillette! It's Color Club Charity Ball, three coats.

Sunlight (the sun came out after hiding for a week, yarr!):

I stamped with Revlon Copper Penny and plate m64, rotating the design for each finger as I went. Also, I scraped the plate for the pinkie using a metal scraper but with all the other fingers I used a plastic scraper. It made for a cleaner image. I'm mentioning this because usually a metal scraper usually works better for me. Odd. 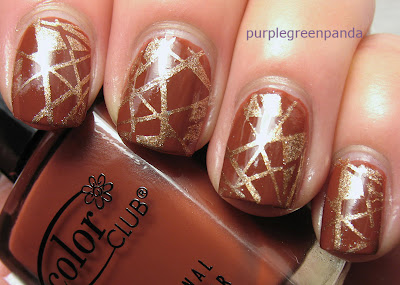 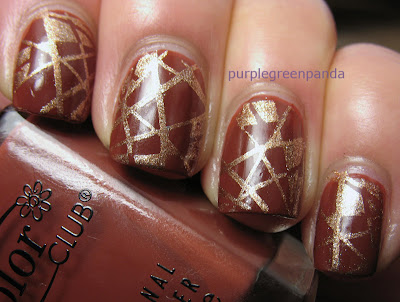 Something I didn't notice until I was editing the pictures is how orange-brown Charity Ball leans on me than everyone else. Here's a link to Johanna's swatch, hers looks much redder. If I'm not mistaken, this is the exact bottle that she swatched with. Since that made me feel crazy, I took a picture of me holding something else orange-brown to show you (and I'm not trying to hide my pinkie, it's just hard holding a full bottle with four fingers) 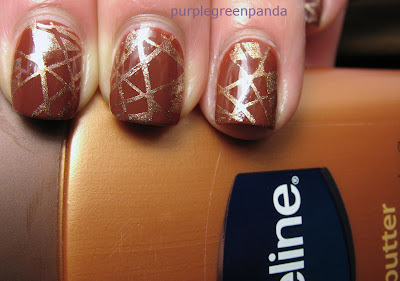 Vaseline bottle photo courtesy of drugstore.com. See? More orange-brown, not very much red. It's this color in real life as well. So bizarre.
Based on swatches I saw online, I didn't think I would like Charity Ball. It turns out I absolutely love it!  It's really perfect for fall. And it's not a color I would buy for myself so thank you Johanna!!
Posted by purplegreenpanda 2 comments: Links to this post

I picked up another bottle of Manhattan after using the other one in a franken. But this bottle seems slightly different, thinner less pigmented formula. Nooo! Oh well.This is two coats New York Color Manhattan stamped with New York Color East Village. Pardon the nicked index finger. At some angles it looked like this.
, 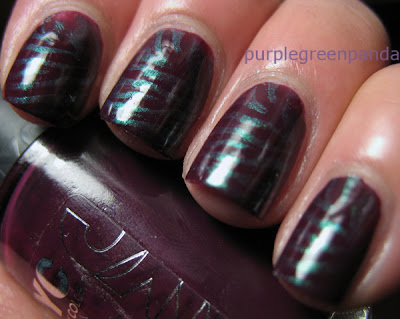 And at other angles the design was barely noticeable. Secret design so I don't get yelled at -- at work. 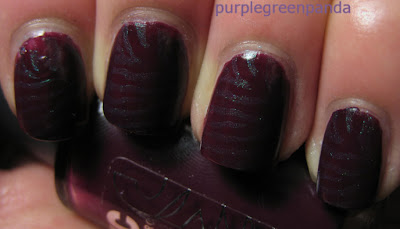 Everything Else I Love